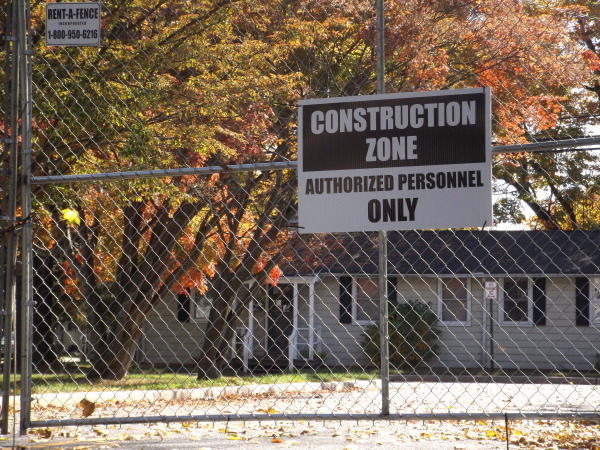 By Philip Sean Curran, Staff Writer
A Princeton Councilwoman is pressing for answers about the extent of possible lead contamination at a graduate student-housing complex along Harrison Street that Princeton University is preparing to demolish on an accelerated basis.
Councilwoman Jo S. Butler has raised the issue publicly and privately after having heard from a resident who lives near the school’s Butler tract, built after World War II. The resident, whom Ms. Butler declined to name, has raised concerns that she and other neighbors have about ground contamination.
In particular, Ms. Butler said Wednesday that the lead concern stemmed from information on a page on the university website. A source forwarded the Princeton Packet a screen grab of the page, which told student residents that “you are not allowed to plant food-bearing plants near your apartment, however.”
“Past use of lead-based paints on the buildings can endanger your health if you grow food for consumption near the units.”
Ms. Butler raised the lead issue at the Princeton Council meeting on Monday in a brief discussion with town engineer Robert V. Kiser.
Mr. Kiser said Wednesday that the school was asked to address the lead concern and report back on the protocols it will follow during demolition. “The university said it would get back to us, and we’re waiting,” he said.
“We’re waiting for answers,” said Ms. Butler, who has clashed with Nassau Hall in the past. “I want to be sure that we’re scrutinizing all our construction projects and environmental risks equally.”
“We have no reason to believe that there is contamination in the soil and there is no data to suggest that. Based on the work planned for the site, which does not involve removing soil from the site, there is no requirement for testing the soil,” Princeton spokesman Martin A. Mbugua said Wednesday. “The University plans to remove all asbestos materials as required by environmental statute prior to demolition and to take precautions to control dust during demolition. Please note that despite the age of the buildings, many components that may have had lead have been replaced over the years.”
It’s not uncommon to find lead in older structures built before 1978, the year New Jersey banned lead in paint, according to the town.
According to the university, the Butler tract was built in 1947 as “temporary housing” for returning GIs.
“Over the years, they have been modestly upgraded, and some ‘new’ units were built in the 1980s,” according to information on the university website.
“The completion of our new Lakeside Graduate Housing complex has eliminated the need for these aging units. This project includes the demolition of approximately 113 structures (360 residences), disconnecting the utilities serving the properties, and capping off the utility infrastructure.”
Kristin S. Appelget, university director of community and regional affairs, last week sent an email to residents who live near the Butler tract telling them the project would be completed sooner than first thought. In an email, she wrote Friday that “abatement and demolition” would be done by the end of January, “six weeks ahead of the previous schedule.”
Municipal Health Officer Jeffrey C. Grosser said Wednesday that there is no requirement to test for lead prior to demolition of a building, unless there has been a case of lead exposure to a child.
He said his office provided the school with best practice techniques that demolition companies should follow, including wetting down the site, disposing of loose paint chips and making sure children cannot access the property.
The school has installed a fence to prevent people from trespassing.