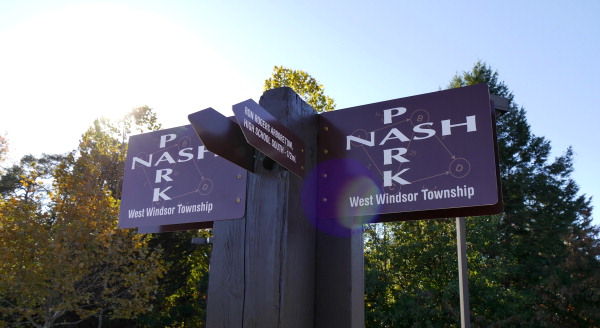 By Lea Kahn, Staff Writer
WEST WINDSOR — “A beautiful place for a beautiful mind and a loving heart.”
That’s how Mayor Shing-Fu Hsueh described Nash Park — the former Princeton Junction Pocket Park, on Alexander Road next to the Valero gas station — that was renamed and dedicated in memory of John Forbes Nash Jr., and his wife, Alicia Nash, last week.
Mr. and Mrs. Nash, who were longtime residents of the township, were killed in an automobile accident on the New Jersey Turnpike in May. They were returning from a trip to Norway, where Mr. Nash — a Princeton University mathematician — had been awarded the Abel Prize for mathematics.
Mayor Hsueh had previously approached Mr. Nash to name the park in his honor, but Mr. Nash — who also had won a Nobel Prize for economics — declined. Mr. Nash, who was the subject of the 2001 film, “A Beautiful Mind,” told the mayor that he was still alive and did not want a park to be named for him.
“He said he would like to stay ‘low profile.’ He was a very humble person,” Mayor Hsueh said at the Oct. 23 ceremony.
But all of that changed, following the May 23 accident. The mayor announced plans to rename Princeton Junction Pocket Park in honor of Mr. Nash and his wife.
In an email that Mayor Hsueh received from one of Mrs. Nash’s cousins in August following the couple’s deaths, Maria del Carmen Holzer summed up the Nash couple’s attitude in two words — humbleness and kindness.
At the end of the email, Ms. Holzer — one of Mrs. Nash’s closest cousins, who lives in Spain — wrote that “in spirit, I shall join all present in the act that will honor two beautiful lives, two beautiful minds,” the mayor said.
Mayor Hsueh said that what made Mr. Nash’s discoveries more astonishing is that he made them while coping with paranoid schizophrenia and ultimately overcoming it. Some of Mr. Nash’s work focused on the importance of game theory in social science and decision-making, the mayor said.
“It took extraordinary courage for this man to allow his story to be made public (in book and film form), and join his wife, Alicia, to fight for mental health care in the state of New Jersey when their son, Johnny, was also diagnosed with schizophrenia,” Mayor Hsueh said.
Mrs. Nash, who studied physics at the Massachusetts Institute of Technology and who later worked for NJ Transit to support the family, was the glue that held the family together, Mayor Hsueh said. The couple were familiar figures in the Princeton Junction neighborhood, and “we will miss them,” he said.
Kristin Appelget, who is Princeton University’s director of Community and Regional Affairs, said Mr. Nash was an “ambassador” for the university. He was associated with Princeton University for nearly 70 years, she said.
“I am sure they would come to enjoy the park,” Ms. Appelget said, thanking West Windsor Township for honoring the couple on behalf of Princeton University.
John David Stier, Mr. Nash’s son, said that his father’s death “was a great shock for all of us,” coming so soon after he had been awarded the Abel Prize. He, too, thanked West Windsor Township for honoring his father and stepmother.
“I know my father loved living here in his 100-year-old home, close to the train station and the highway. It was perfect for Alicia to commute to work,” said Mr. Stier, who grew up in Massachusetts and visited his father and stepmother in West Windsor Township.
Mr. Stier also thanked West Windsor Township and its residents for its support of his family “in what has been a most difficult time.” Mr. Nash’s son, Johnny Nash Jr., lived with his parents in their home in the Princeton Junction neighborhood.
Plans for Nash Park — originally known as Princeton Junction Pocket Park — have been in the works for many years, Daniel Dobromilsky, West Windsor Township’s landscape architect, told the attendees.
The land was donated by the developer of The Gables at West Windsor, which is a senior citizens development adjacent to the park, Mr. Dobromilsky said. It was intended to be the site of a firehouse, but when it was deemed too small for that purpose, it became a park.
“In 2003, the Mayor’s Open Space Utilization Task Force fostered the concept of a central ‘town green’ that would serve multiple functions for gathering, picnicking and lawn games in the middle of the central business district. The edges of the space would provide gardens of trees and flowering plants, with a meandering strolling path,” he said.
Six years later, the West Windsor Township Sustainability Plan said that ethnic gardens could be a means of facilitating the great American melting pot in West Windsor, Mr. Dobromilsky said.
A few years later, an intern in landscape architecture who was working in the township’s Community Development Department, “melded” the two concepts into a “town green design” with Asian-themed gardens along the perimeter to create a place for Eastern garden traditions to meet Western garden traditions, he said.
A traditional Japanese garden and zig-zag bridge are being developed, Mr. Dobromilsky said. A gazebo, a pond, benches, picnic tables, a moon gate, extended strolling paths and a traditional Asian Indian garden are also part of the concept plan and future development for the park in addition to the town green, he said.
Township residents have contributed money to the Friends of West Windsor Open Space to cover the costs of some of the improvements to the park, Mr. Dobromilsky said. Nash Park is a “truly fitting tribute” to Mr. Nash and his wife, he added.
“It represents a series of contributions to their community by a broad spectrum of individual community members, following a traditional guiding concept (that is) intended to improve the community for present and future residents,” Mr. Dobromilsky said. 