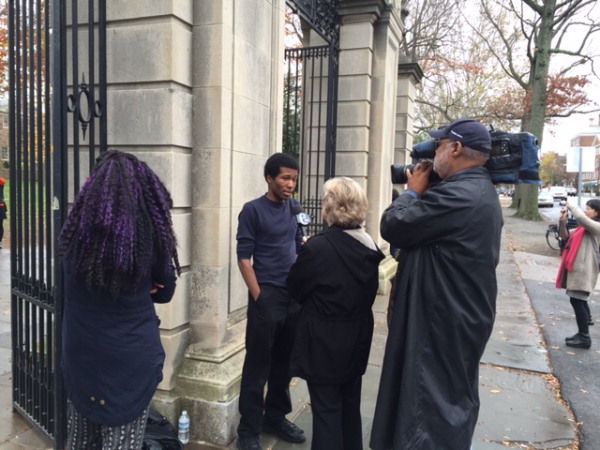 By Philip Sean Curran, Staff Writer
Princeton University has become the latest battleground between black students and college administrators, with protesters demanding this week that the school administration meets all of their demands, which includes removing former university president and U.S. President Woodrow Wilson’s name from campus buildings and the public policy school.
On a day of campus protests nationwide, students walked out of classes Wednesday and staged a sit-in at school President Christopher L. Eisgruber’s Nassau Hall office. The protest continued through the day, as about 15 students refused to leave his office and slept there overnight.
The student group, the Black Justice League, on Wednesday presented Mr. Eisgruber a list of demands that also included cultural competency training for staff and faculty and a dedicated space on campus for black students. The group said Mr. Wilson, who supported segregation, left behind a “racist legacy” at Princeton, the school he was president of before becoming governor of New Jersey and president of the United States.
The Woodrow Wilson School of Public and International Affairs was started in 1930 and named after Mr. Wilson in 1948, and today is led by former Obama administration official, now dean Cecilia Rouse, who is black. Aside from changing the name of the Wilson school, students want a residential college named after Mr. Wilson renamed and the portrait of him in a dining hall taken down.
Mr. Eisgruber and Princeton dean of the college Jill Dolan met Wednesday with students for about 90 minutes, but he refused to sign their document listing their demands. University spokesman Martin A. Mbugua said inside Nassau Hall that Mr. Eisgruber was having a “private conversation” with students and that media were not allowed inside his office to observe.
In dealing with Mr. Eisgruber’s first crisis as president, the university has been careful to avoid direct confrontation between the protesters and security personnel. There was a light footprint of campus security personnel visible at Nassau Hall. The university has not requested help from the Princeton Police Department, said Chief Nicholas K. Sutter by email Wednesday.
There was no attempt to forcibly remove students from the building, although there are limits on access to Nassau Hall — the historic 18th century building that was under siege during the Revolutionary War and last saw a student sit-in in 1995.
Food, toothpaste and other necessities were allowed into the building, including some faculty to speak with the students who refused to leave. According to the protest organizers, any students who left Mr. Eisgruber’s office would not be allowed back in.
According to one student, former Brown University President Ruth Simmons, who was in town, also spoke to the student protesters.
Other students slept outside Nassau Hall; some having tents on the front lawn. Earlier in the day, professors were bringing in pizza for the students.
Unlike scenes from the student protest at the University of Missouri earlier this month, Princeton students spoke with members of the media covering the event, although some initially were reluctant to go on camera, and did not try to inhibit the movement of the press to interview or take photographs.
On day two of the protest, students on Thursday sat on the floor where visitors enter at the main entrance of the building, but there was no access into the suite of offices where Mr. Eisgruber and other administrators work. Students said their demonstration would go on “indefinitely” until the university gives them what they want.
“We’re not negotiating,” said junior Asanni York from inside Nassau Hall on Wednesday.
Now in his third year as president, Mr. Eisgruber faces arguably the biggest test of his leadership. He has not spoken to the media nor has he issued a public statement about the crisis since it broke out. The story has gone national, with TV news crews parked on Nassau Street Thursday morning.
The school has taken steps to mollify internal critics of the university. In May, the university said it would hire an administrator focused on diversity and inclusion and spend more money on minority “student initiatives” and on cultural studies. The school also announced a project called, “Coming to Terms: Race in Princeton’s Past and Present,” aimed at exploring “the ways in which the university considers its history regarding race, including elements of Woodrow Wilson’s legacy. Mr. Wilson served as Princeton’s 13th president between 1902 and 1910.
“We have a responsibility to expand our perspectives and improve our campus climate, so that minority members of this community feel fully welcomed and so that the anonymous cowards find no fertile ground here for their hatred or their ignorance,” Mr. Eisgruber said in speech on campus in April.
In the 2014-15 academic year, 9 percent of undergraduates were black, compared to 49 percent who were white, 25 percent Asian and 9 percent Hispanic, with the rest multi-racial and unknown, the school reported.
On Wednesday, the school also announced that the title of the leaders of the six residential colleges had been changed from “master” to “head of the college.” The change took effect immediately, Princeton said.
“The new title better describes their roles, and it does away with antiquated terminology that discomfited some students, faculty, and the heads of college themselves,” Mr. Eisgruber said in a statement.
The university has met some of the earlier demands of the student group, including making African-American studies a major, rather than just a minor, said junior Destiny Crockett.