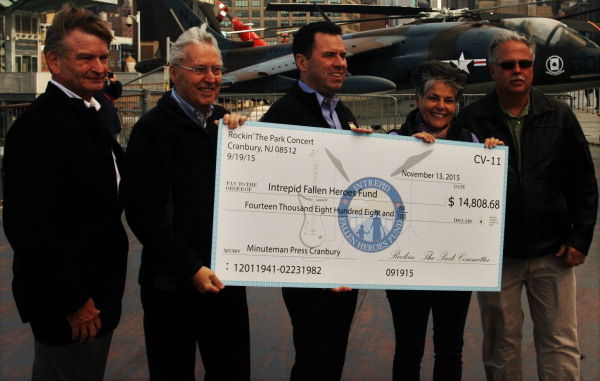 It started with a simple idea, an idea that would ultimately lead to one exciting adventure.
Vietnam veteran Alan Stefanowicz had a vision to somehow give back to the younger generation of veterans. But he could never have imagined where it would lead him, and all the supportive people he would interact with along the way.
In September 2014, the “Rockin’ The Park” concert was conceived. The Intrepid Fallen Heroes Fund was soon to become its beneficiary.
Along with Mr. Stefanowicz, the committee formed to make the concert a reality included Phylissanne Stehn, Ron Witt, Charles Valente and George Conley.
The group first established goals. Monthly organizational meetings and member assigned, including finding volunteers that would be needed to enable a smooth operation on concert day.
A key component and major requirement for the concert was identifying and reaching out to various sponsors to seek their help in funding the concert.
“The process of identifying food vendors and musicians was not an easy task and so we’re thankful for all those who stepped up to participate,” said Mr. Stefanowicz.
Throughout the planning process, one goal remained uppermost on the committee’s mind, that of maintaining a primary focus on the veterans themselves. In addition, it was important to bring attention to the Intrepid Fallen Heroes Fund and what its mission was all about.
“We continually highlighted the fact that all the great work they do is supported solely by private funding,” said Mr. Stafanowicz.
To help market the concert, a Facebook page and concert website were created to serve as the marketing tools for all concert-related activities. Paypal was established on the concert website to allow visitors to donate directly to the Intrepid Fallen Heroes Fund while online.
“One of our main thrusts was to reach out to local businesses and private donors to give them an opportunity to support the concert financially. Along with this, a fervent effort was made to motivate Cranbury residents and to encourage them to give up a Saturday to come out and support our veterans,” said Mr. Stefanowicz.
A initial rally by the Freehold Motorcycle Club was organized to help raise additional funds for the concert. By July 4, 2015, the group had raised $7,800.
“In addition, all our advertisers were in place, six of New Jersey’s top bands had been booked, local food vendors were onboard, concert volunteers had been secured, and our concert t-shirts were ready,” said Mr. Stefanowicz.
The committee decided that there would be no businesses (other than food vendors) or individuals allowed to promote themselves or offer any items for sale at our fundraiser. Vendors donated 10 percent of their day’s revenue.
Effectively promoting the concert was a vital step in the planning process. There were several in-studio interviews conducted along with PSAs (Public Service Announcements, all to better market the event. Local newspaper articles and magazine ads were generated. Two large banners adorned Main Street in Cranbury along with many yard signs announcing the concert. In addition, Rockin’ The Park had its own table set up on Cranbury Day to sell t-shirts, hand out flyers and to pre-sell concert tickets.
Cranbury’s Boy Scouts and Girl Scouts, police, fire department, and rescue squad were all on hand at the concert. East Windsor Target volunteers pitched in as well.
“This unwavering effort was true community support at its best,” said Mr. Stefanowicz.
Total funds raised through the donations totaled approximately $25,000. Additional funds were raised through Paypal via the group’s website. A check for $14,808 was presented to the Intrepid Fallen Heroes Fund.
The check presentation ceremony was held aboard the Intrepid Sea, Air, and Space Museum on Nov. 13. David Winters, Intrepid Fallen Heroes Fund president, invited the Rockin’ The Park committee to tour the ship’s museum. The concert donation check, along with a $2,500 grant check from the Church & Dwight Co. was presented on the deck of the Intrepid aircraft carrier itself.