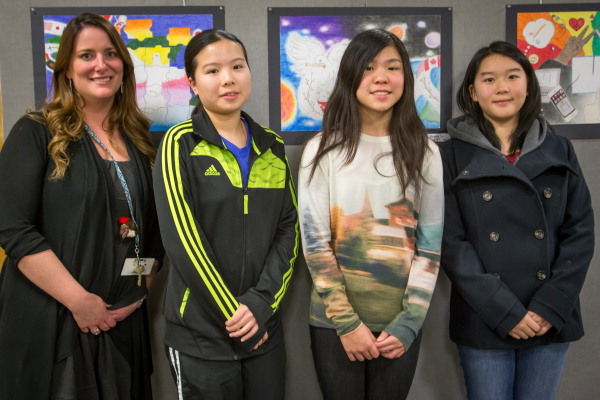 Lili Wang and Miranda Cai both eighth-grade students at the Cranbury School, were chosen to advance to the district level of the Lions International Peace Poster Contest by winning a local competition sponsored by the Cranbury Lions Club.
Miranda’s and Lili’s posters were among more than 375,000 entries submitted worldwide in the 28th annual Lions contest. Lions Clubs International is sponsoring the contest to emphasize the importance of world peace to young people everywhere.
“I used people from diverse backgrounds around the world coming together to create a puzzle of peace which were different in their actions but all have a common goal,” said Lili. The puzzle is not yet complete.
Miranda’s poster went out of this world to show a dove encircling earth with an olive branch entwined with flags of nations of the world.
The posters were selected for originality, artistic merit and portrayal of the contest theme, “Sharing Peace.” The judging was held Nov. 13 at the Cranbury School.
Cranbury Lions Club Peace Poster chairwomaan Fay Kobland said that she was impressed by the expression and creativity of the students at the Cranbury School.
“It is obvious that these young people have strong ideas about what peace means to them. I’m so proud that we were able to provide them with the opportunity to share their visions,” said Ms. Kobland.
Cranbury School art teacher Stacey Crannage guided the students through the process of creating the posters by offering a club during the lunch-recess time several days a week.
The local posters face stiff competition in their quest through the District 16-J, Multiple District 16-New Jersey, and international rounds of competition, Kobland said.
The Cranbury Lions are proud of the 12 students that participated in the Peace Poster competition this year. In addition the Cranbury Lions awarded honorable mention to Sophia Teng.
The award-winners were honored by the Cranbury Lions Nov. 18 at the Cranbury School. Families of the award winners were in attendance. Each winner received a certificate and monetary award from the Cranbury Lions. Stacey Crannage helped to present the awards and Susan Genco, chief school administrator, congratulated the students and spoke about the Cranbury School. All 12 posters were on display.
One grand prizewinner and 23 merit award winners will be selected at the top level. The grand prize includes a cash award of $5,000, plus a trip for the winner and two family members to the awards ceremony at Lions Day with the United Nations. Traditionally the grand prizewinner is also honored at the Lions International Convention, which will be held this year the last week of June in Hawaii. The 23 merit award winners will each receive a certificate and a cash award of $500. View international grand prize and merit award winners at www.longsclubs.org.
The Peace Poster Competition is just one of many programs the Cranbury Lions have for service to youth. Other youth programs involve sponsoring the Jamesburg Leo Club at the New Jersey Training School, pumpkin carving Halloween activity, four scholarships and one community service award as well as donations to the Cranbury Girl Scouts and Boy Scouts. In addition, the Cranbury Lions Club provides assistance to other organizations that help children like camp experiences for children with disabilities, blindness or illnesses.
Lions Clubs International is the world’s largest service club organization with 1.35 million members in more than 46,000 clubs in 210 countries and geographic areas. In addition to its efforts toward conquering blindness, the organization has made a strong commitment to community service and helping youth throughout the world.