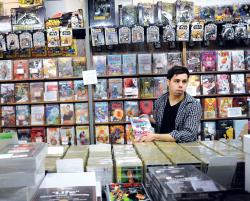 The dozens of long, white cardboard boxes stuffed with comic books may look daunting to the uninitiated, but to Vazquez, who works at the store, every box signifies more than just collections of ink and paper.

“There is just such a variety with comics. It doesn’t have to be just about superheroes,” said Vazquez, 24, of Howell. “The limits are non-existent.”

For millions of people like Vazquez, each weekly release of new comic books is a chance to visit far away worlds, catch up with old friends or peek into the machinations of evildoers.

Each “bagged and boarded” book is a new world of possibilities. 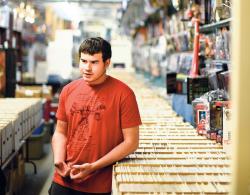 Standing in the main aisle of long boxes packed with comic books, Adam Nieves, 19, of Toms River, discusses his love for the medium. STAFF PHOTOGRAPHER ERIC SUCAR “I think in some ways, people can connect to the stories and escape from reality,” Vazquez said. “People like to connect to the stories, characters, art, writing. So many things go into a comic book that hooks someone at some level.”

While comics have been a staple of Americana since the late 1930s, a recent boom in popularity for the medium has turned the long maligned “comic nerd” into a more socially acceptable character. “I think people are much more comfortable identifying themselves as a ‘nerd,’ ” MAD Event Management President Martha Donato said.

Conventions, or “cons,” are social gatherings where enthusiastic people gather to share their love of a particular industry or form of entertainment by participating in panel discussions, meeting professionals and visiting exhibitions, among other activities. In the case of comic book conventions, that usually means opportunities for fans to meet writers and artists, have their comics signed and purchase collectibles from their favorite shows or comics from various vendors at the show.

“I like to create a sense of community where people come in and feel like they belong,” Donato said. “If you’re coming in a costume, as a collector or as a casual fan, you get a sense that you belong there.”

While not the first convention of its kind in the state, Donato said the show was the product of a growing interest in cons in recent years.

In October, the 10th annual New York Comic Con was the host to nearly 170,000 people over the course of four days at the Jacob K. Javits Convention Center in Manhattan.

And while it may be easy to conjure an image of 170,000 stereotypical nerdy males crammed into a convention center, recent years have seen a spike in attendance from female comic book fans, according to Donato.

According to a September report by Graphic Policy, which compiles demographic statistics about comic readers, approximately 18 million American women accounted for nearly 43 percent of Facebook users who selfidentify as comic book fans.

That shift, Donato said, is a major paradigm shift for comic books as a whole.

“‘Nerd’ used to be a moniker for a guy, but now girls are even identifying with it, which changes the dynamic, and that makes it more culturally acceptable,” Donato said. “It used to be that if you were labeled a nerd, you weren’t attractive to the opposite sex.”

As a regular attendee of comic conventions, Josh Peck, 24, of Bradley Beach, said the change in demographics stems mostly from the mass appeal that each show tries to generate.

“Comic Con is such a gigantic spectacle,” Peck said. “You could have never read a comic book in your life and still be entertained by comic con.”

Over the years, Peck has worked as a vendor at various conventions for a small Waretown based comic book publishing company called Angry Drunk Graphics.

Peck, who currently has a career in production for various venues in Asbury Park, said he found his calling at conventions.

“I was in college and going absolutely nowhere. I had no direction, but I did realize that when I worked a comic con, I loved it,” Peck said.

Peck said the hustle he experienced making sure the logistics of running a booth at a convention went smoothly excited him.

“I looked around one year and wondered how I could do that as a job,” Peck said. “What I was doing was essentially production… and that essentially fueled the fire to get me into the position I am in now.”

Though he said he got paid for his work, Peck said his time at comic book conventions have been fun, yet expensive experiences.

“Whenever I head out to a con, I usually walk away with a lot less money than I came with,” Peck said.

It’s a story that should be very familiar to most comic book fans. After all, comic books are big business.

According to estimates from John Jackson Miller, of Comichron.com, and Milton Griepp, of ICv2.com, sales of graphic novels and comics in North America totaled $935 million in 2014.

Last year’s sales numbers, according to Miller and Griepp, represented a seven percent increase from the previous year and an even larger jump from the $255 million to $275 million estimate from 2000.

That success is largely attributed by fans and experts alike to the mass appeal that films, television and video games have brought to the comic book industry.

“Nobody really knew about ‘The Walking Dead’ before the TV show came out,” Peck said. “If people watch that show and hear that the book is better…it could spark someone’s interest to go back and read the comics.”

Vazquez, who studied at the University of the Arts in Philadelphia to become a comic book artist, said the influx of new fans was an exciting proposition for the industry as a whole.

“I have friends who would have never picked up a comic book before, but after the movies came out, they wanted to know more,” Vazquez said. “It’s just more people to share the experience with.”

While fans such as Peck say they are excited that the movies are playing a big part in the comic book world, some fans are a little more resistant to outside influence.

Though Adam Nieves, a 19-year-old who works with Vazquez, admitted that movies were what got him into comics, he said he worried that Hollywood was sometimes changing comic books and not the other way around.

“I’m iffy about it because it really depends on who works on the movies,” Nieves said. “They have a big impact on how the comics come out, which is something I don’t really like.”

Much like some fans’ resistance to change coming from Hollywood, recent data show that a vast majority of comic book readers are shying away from recent advancements in digital comic book distribution.

Of the estimated $935 million in sales last year, only $100 million was spent on digital comics available on various smart devices.

In a medium still dominated by print, fans such as Peck said those figures prove that many believe the best experience comes from actually holding something tangible.

“You’ll never get the same feeling reading comics from a piece of plastic or glass,” Peck said. “Certain comics from certain eras have certain smells. You can’t smell an iPad.”

For Peck, the allure of comics not only stems from the stories found inside, but also the historical value that comes from owning a physical collection.

Ever since inheriting his cousins’ comic books in the late 1990s, Peck has been an avid collector of comics from the “Golden Age” and “Silver Age” of comics and beyond.

While the historical aspect of comic book collecting has been a driving force for his collection, Peck admitted that it sometimes goes a little deeper than that.

“I’ll get stuck on certain writers or artists and then feel like I need to have or read everything that they ever did,” Peck said. “The completionist side of the hobby comes in with that little nagging voice that tells me ‘you don’t have that issue.’”

For Bezan Madon, 22, of Old Bridge, the penchant for collecting comics came at a young age.

Having grown up near MC Comics on Old Matawan Road, Madon began collecting at 13 years old with the help of his parents.

Though Madon said he loved reading the typical comics featuring Spider-Man and other Marvel properties, it’s the oddball releases that catch his eye.

Most recently, Madon said he picked up a copy of “Archie vs. Predator,” which features the youth from Riverdale going up against the alien from the ’80s action films.

“Whenever I went in [to a comic book store], there was always this cool stuff that I’d never seen before,” Madon said. “If I’ve never seen it before, I have to buy it.”

While Madon said his family generally tolerates his hobby, he occasionally gets ribbed by his uncle, who collects stamps and jokes about the worthlessness of comics.

“Obviously there’s a bigger return on stamps … so [my uncle] makes fun of me, asking ‘why do you collect these things when they’re intrinsically worthless,’” Madon said.

While there have been numerous stories over the years of rare comic books selling for upwards of $500,000, the majority of comic books are not worth a fraction of that price.

Older comics are harder to find, while newer comics are printed in high numbers, driving the value of each issue down substantially.

For collectors like Mike Vaccarelli, 33, originally of Tinton Falls, the push to continue collecting does not just lie in the rarity or value of a certain book.

“I probably spend too much money and I live in an apartment in Manhattan, so I’m out of room,” Vaccarelli said with a laugh. “I’ve had to purge a few times and will probably have to do it again.”

Though his weekly consumption of comics has slowed down, Vaccarelli said he now purchases anywhere between 15 and 20 comic books a week.

In the Manhattan apartment that he shares with his wife and newborn son, Vaccarelli estimated that he has approximately 3,000 comic books stored in long boxes.

For Vaccarelli, his love of comics is something that he cherishes. He gets anxious for a chance to talk about comics and the stories he’s following at any given time.

Vaccarelli said that enthusiasm was what helped him create a weekly podcast on the comic book industry called “The Omega Box.”

Though the show has taken a hiatus since the birth of his son, Vaccarelli said the podcast generally featured reviews and discussions of the latest comics.

Sometimes, after conventions, Vaccarelli said the show would feature interviews with comic book creators, which was one of his favorite aspects of the show.

“If you have interesting questions that hadn’t been asked before, [comic book creators] open up,” Vaccarelli said. “A lot of the time, they are willing to open up and just talk comics.”

Though he now focuses a lot of his time on his responsibilities as a new father, Vaccarelli said he was excited to bring his love of comics into a new generation with his son.

“I can’t make him like or dislike anything, but I can expose him to it,” Vaccarelli said. “I definitely will.”

Regardless of how people read their comics, what gender they are or how much or little they devote to amassing a collection, Vazquez said the concept of comic books will endure into future generations. And he wants to share that experience.

“No matter what, comic books aren’t going away,” Vazquez said. “There’s always going to be stories to tell — no matter what — and I just want to be a part of telling those stories.”