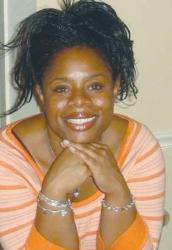 At a press conference called by the Monmouth County Prosecutors Office to announce the charging of three suspects in the 2009 murder of Jonelle Melton, her husband Michael Melton addresses family, friends and reporters. During his speech, Melton called the experience a “nightmare” and urged anyone with information regarding the murder to come forward. After six years of waiting, the family and friends of Jonelle Melton, a popular Red Bank teacher who was murdered, have found some closure.

“This has been a nightmare for over six years. My family and I have been through a lot of grief and trauma. There were times I didn’t think this day would come,” said her husband, Michael Melton, at a press conference held by the Monmouth County Prosecutor’s Office.

“Jonelle was an innocent, loving teacher, and she didn’t deserve this,” he said, overcome with emotion.

MICHAEL NUNES/STAFF Standing solemnly at the press conference was Melton’s mother, Gwen Cruse, who did not speak. Three have been charged in connection with the murder of Melton, who was 33 when she was killed in her apartment in Neptune City. According to a spokesperson for the Prosecutor’s Office, Melton sustained multiple trauma wounds.

On Nov. 19, Monmouth County Acting Prosecutor Christopher J. Gramiccioni announced at a press conference that three Asbury Park residents have been charged for her September 2009 murder. All three are being held on $1.5 million bail.

According to Gramiccioni, the investigation found that James Fair, 27, Ebenezer Byrd, 35, and Gregory Jean-Baptiste, 26, had planned to rob another apartment in the Brighton Arms complex. The men mistakenly broke into Melton’s apartment and allegedly murdered her.

For colleagues of Melton at Red Bank Middle School, there was a sense of relief that the six-year “nightmare” was reaching a conclusion.

“When we heard the news yesterday, we were saddened, of course, but felt a sense of relief that they were able to get the men who did this and they will be coming to justice.”

Laura Morana, who was superintendent of schools at the time of Melton’s murder, was present at the press conference.

“I am delighted that finally the investigation was completed in such as way that it will allow the family and members of the Red Bank school system to have closure,” said Morana.

“She was an individual who was just so filled with energy and passion for her work,” she said.

Colleagues described Melton as “energetic, vibrant and warm.” A candlelight vigil was held at the middle school on the day Melton’s body was discovered by her husband, and school was canceled Sept. 21, the day of her funeral.

According to Gramiccino, all three are currently incarcerated on unrelated charges.

Fair is currently awaiting trial on multiple charges, which include attempted murder and robbery, according to the prosecutor’s office. Byrd is serving a 12-year sentence for two separate shootings in Asbury Park that also occurred in 2009. Jean-Baptiste is awaiting trail for drug distribution and gun possession charges.

According to Gramiccioni, the investigation is ongoing, and detectives will continue to pursue additional leads. He did not disclose details of the investigation that led to the charges against the three suspects.

“She was loved, just genuinely loved. She had the heart of Job. The children loved her.

“I want justice for Jonelle.”