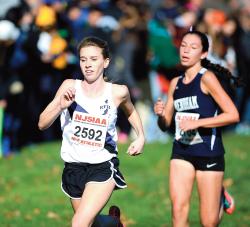 The Colts acted just as Heath wanted, using the loss as motivation for the Meet of Champions (MOC) Nov. 21 back at Holmdel Park.

The Colts produced their best race of the season when it mattered most.

Led by Blaise Ferro, who finished second overall but first in team scoring, the Colts edged Don Bosco, 87-92, to extend their MOC record to 21 victories including a record-tying sixth straight.

The Colts won the championship as they have so many in the past by being the strongest team over the last mile of the 5K race.

It was a three-team race between the Colts, Don Bosco and Group IV state champion Old Bridge High School when the runners were exiting the bowl and heading to the final mile and the back woods. It’s where the Colts gained the most ground.

Heath noted the final mile was the difference.

“You need all five guys to run well,” Heath said. “That’s hard to do. Sometimes you need more than five.”

In CBA’s case, the sixth and seventh runners, Nick Trigani (16:35) and Drake Anzano (16:37), did their jobs. They didn’t figure in the scoring, but they finished ahead of Don Bosco’s fourth and fifth runners.

Brian Dengler (16:25) and Noah Yuro (16:30) ran their best Holmdel Park times of the season in finishing 19th and 21st as CBA’s second and third finishers.

Yuro did not even run at the group championships and gave CBA a big lift as their third runner.

“He had been looking pretty good,” Heath said of Yuro. “[The decision to run him] worked.”

St. John Vianney High School junior Nora Honrath came up with a huge personal best, finishing seventh at the MOC in 18:34. She placed second among Shore Conference runners, trailing only Ciara Roche of Freehold Township High School, who was sixth (18:30).

Rumson-Fair Haven Regional High School, which captured the Group II championship for the third time in the last five years, was 15th at the MOC with 349 points.

The next stop for CBA is the Dec. 5 Nike Cross Nationals in Portland, Oregon. The Colts are headed back to the national championships they last won in 2011.

CBA qualified for the Nike meet at the Nov. 28 Nike Cross Nationals Northeast Regional at Bowdoin Park in Wappingers Falls, New York. Led by overall winner Ferro (15:45.90), the Colts were second to Downington High School West, 97-140, to nail down one of the two automatic qualifying positions.

Don Bosco and Old Bridge were fourth and fifth, each with a score of 195.

In addition to their 2011 national championship, the Colts were the 2013 runners-up.

The Nike Cross Nationals will be raced over the Glendoveer Golf Course in Portland.