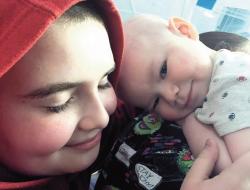 Michael Rojewski holds his 2-year-old brother, Wyatt, who is suffering from neuroblastoma. PHOTO COURTESY OF JESSICA SIRNA SOUTH AMBOY — The community is rallying around Wyatt Rojewski, a 2-year-old who was diagnosed with neuroblastoma earlier this year.

“He’s a little wild man. He doesn’t know he’s supposed to be sick,” said Wyatt’s mother, Jessica Sirna, a lifelong South Amboy resident. “The doctors are absolutely amazed by him.”

Sirna said Wyatt is currently responding well to treatment, explaining he is technically in remission but requires additional treatments to prevent the cancer from coming back. Those treatments include a second stem cell transplant right after Christmas. He is currently in Philadelphia, recovering from the first transplant.

“Hopefully he will be home for Christmas,” Sirna said, optimistic that the toddler will be able to join herself, her son Michael Rojewski, 11, and the children’s father, also Michael Rojewski, for the holiday.

Sirna said neuroblastoma is particularly dangerous because there are no symptoms.

“The only way to tell is if you have a CT scan done,” Sirna said.

However, Wyatt’s case was unusual because in the spring he became sick with vomiting and what looked like an ear infection. He was given antibiotics but then, Sirna said, his face swelled up.

She brought him back to the doctor, who saw that his lymph nodes were infected.

An immediate CT scan revealed a tumor the size of a baseball in his skull, as well as three more in his body. Within 48 hours, Wyatt underwent brain surgery.

“We’re very lucky that it presented itself the way that it did,” Sirna said.

But, she was told from the time of diagnosis that it would be a long road.

“We were flat-out told, ‘Do not make plans for the next year.’”

She said what causes neuroblastoma is unknown, and with this type of cancer, experts have ruled out genetics and environmental causes. She was told it might have started in utero or developed sometime after; the cancer is typically only found in children younger than age 5.

Accepting Wyatt’s diagnosis was hard for her other son.

“At first it was extremely tough on him, she said. “Just hearing the term ‘cancer’ scared the bejeezus out of him.”

But Michael has been doing everything he can to help his little brother.

“I’m just thankful for him because he’s such a big help. He loves his brother more than anything in the world,” Sirna said.

Not surprisingly, the medical expenses associated with Wyatt’s care have added up. One medication Wyatt takes for three weeks following a round of chemotherapy costs $1,000 a day, and consistently poses challenges for insurance coverage.

Sirna said it was hard to open up to her neighbors about Wyatt’s condition, largely because it was hard for her to initially accept.

“You know South Amboy — you say it to one person, it gets around,” she said.

But in this case, that’s been a good thing. An event that raised $21,000 for the family was held in October, and April’s Jammin’ for Jaclyn concert will also raise funds. First Presbyterian Church in the city has opened up an account for Wyatt where people also can make donations.

“We were just amazed by the outpouring of love,” Sirna said, explaining that many South Amboy businesses contributed to that October event’s success. “Because of that, we don’t have the financial burden as much.”

She said she understands that people can find it hard to speak with her about her son’s condition.

Sirna said she is grateful to have grown up and still live in a town where there is so much support.

“It’s beautiful how people come together when you are faced with such tragedy,” she said. “Some of these people are in a way helping to save his life. Trust me, that’s something that will be told to him over and over again.”

She stressed that her family has a lot of hope, and living in South Amboy has played a big role in instilling that hope. In fact, the younger Michael will be lighting the city’s Christmas tree.

It’s those types of things that mean a lot to Sirna.

“Only in South Amboy would I be that sure that my boys would be that loved. We’re a small town, but we’ve got the biggest heart,” she said. “I couldn’t imagine living anywhere else.”

Anyone looking to make a donation to the family can send a check to First Presbyterian Church with a note in the memo field indicating the funds are for the benefit of Wyatt Rojewski.