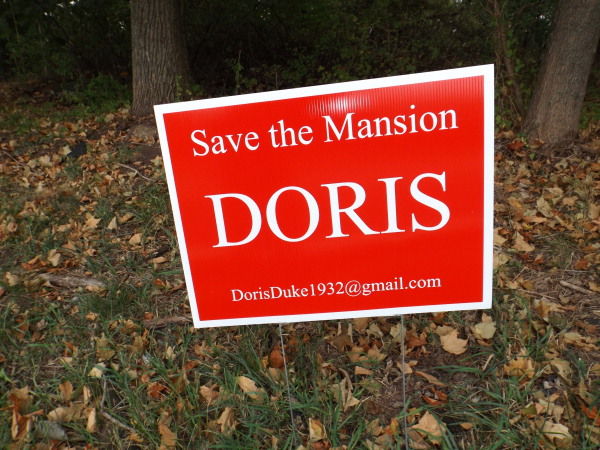 By Gene Robbins, Managing Editor
Superior Court Judge Yolanda Ciccone declined Friday morning to stop what she called the “dismantling” of Doris Duke’s former main residence within the 2,500-acre estate in northern Hillsborough.
Judge Ciccone called attorneys for Hillsborough Township, Duke Farms and the citizens’ group DORIS together the morning after DORIS filed an appeal for injunction to stop work at the main residence until it can have a full appeal of the township’s permission to allow Duke Farms to apply for a demolition permit.
David Brook, a township resident and attorney for DORIS, filed the injunction request to seek an immediate order to stop Duke Farms from removing what Mr. Brook called irreplaceable “antiquities” from the house of the wealthy heiress.
Mr. Brook told the judge that Duke Farms was “ignoring their mission” as a non-profit protector of the property and was ripping out things like mantels, door frames, plumbing fixtures and windows and allowing a contractor to sell them on the Internet.
He said the end result was the home was demolished piece by piece, while DORIS was pursuing administrative and legal ways to stop the work.
“Once you destroy a historic site, you cannot put it together again,” he said.
Willard Bergman, attorney for Duke Farms, said the work wasn’t affecting the building structurally. He said a contracted salvage company had won a bid to remove specific items and award them to the highest bidder. A large fountain that was removed will be sent to another Doris Duke museum, probably in Rhode Island, he said.
Mr. Bergman added that may things have to happen, like shutting off water, electrical and sewer service, for instance, before Duke Farms can apply for a demolition permit.
William Willard, the attorney for Hillsborough Township, said the township considered the house to be a private residence secluded from the public. He said the township suggested Duke Farms seek building and plumbing permits, even though they may not be required, for removal of items. Once they did, “we found no basis to deny it,” Mr. Willard said.
The judge used the word “dismantling” instead of “demolishing.” She said she had to consider two things of the motion to enjoin further work: Is irreparable harm being done, and what is the likelihood of success of an appeal overturning the Historic Preservation Commission’s Oct. 15 decision to allow Duke Farms to pursue the demolition.
Allowing there was always a small chance to success, she cautioned, “It’s very hard to say a 6-1 decision could be overturned as arbitrary and capricious,” she said.
Mr. Brook said afterwards that he would file the necessary paperwork to begin legal proceedings seeking a court hearing contesting the historic commission approval.
The dispute over demolition dates back to July when Duke Farms sought the historic preservation commission’s approval to demolish the 65,000-square-foot house, for which it could not justify any purpose within the present mission of the foundation to develop the property as a model of environmental stewardship.
The building’s core dates back to a 1860s farmhouse, and it was often renovated and expanded over the decades by tobacco empire builder James B. Duke and his daughter, Doris. On Friday morning, both sides called the home a historic site.
The court appeal came a day after the township Board of Adjustment on Wednesday night rebuffed a request to hear the appeal of the Historic Preservation Commission.
Ms. Duke, who used her life of privilege to become a preservationist and philanthropist, made the residence her principal home until she died in 1993.
Duke Farms Foundation has converted the estate’s more than 2,000 acres into an environmental preserve open free to the public. It said it needed to remove the deteriorating main residence to open that part of the property for public use and to be able to shift money to restore the Coach Barn and other properties on the estate.
Michael Catania, executive director of Duke Farms, shared a press release that exterior restoration of the Coach Barn is “steadily proceeding” and is likely to be completed early in 2016. Duke Farms is pursuing renovation of that building for public conference space.
Objectors to the demolition of the residence will hold a symbolic 103rd birthday party for Ms. Duke on Sunday, Dec. 6, rain or shine, at 1 p.m. at Duke Island Park, Oak Grove Pavilion, Bridgewater Township.
Ms. Duke was born on Nov. 22, 1912, and died on Oct. 28, 1993.
The “birthday party” will feature a cake, an awards ceremony, a presentation of the value of preserving her residence, which is “threatened by the very foundation she set up to protect it.”
DORIS, an acronym for Demolition Of Residence Is Senseless, and members of the community say they plan to mourn the demise from the estate that she called her home. 