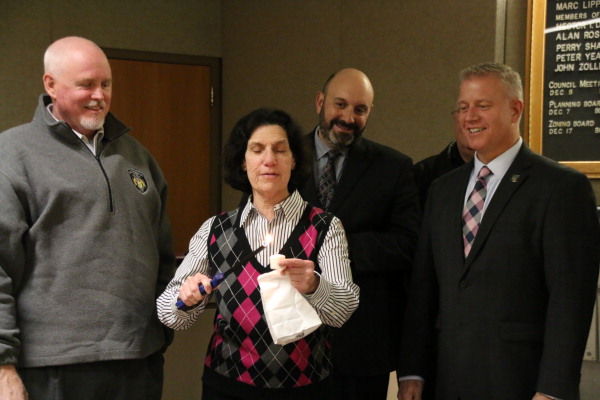 By Amy Batista, Special Writer
EAST WINDSOR – The Township participated in the 14th annual Womanspace Communities of Light Monday evening as officials lighted luminary candles which were spread out around the Municipal Building to light it up.
“This is being celebrated throughout our area tonight,” said Mayor Janice Mironov.
Township officials, council members, police officers, Womanspace team and volunteers, Mercer County Freeholder Andrew Koontz, Senator Linda Greenstein (D-14) and local residents participated in the event Dec. 7 at the Municipal Building.
“Tonight is an opportunity to join with other communities and light up our Municipal Building to raise some money for Womanspace and to be able to focus on what really is a very important issue in our community and communities throughout our state and country,” Mayor Mironov said.
She said domestic violence is a concern and events like this one ensures that the community is part of the solution.
“That we can focus on the topic and let those know who have been victimized that they have support and they have resources available through Womanspace and our local entities to help support them and get them out of their situations,” said Mayor Mironov.
She issued a proclamation recognizing the event as a “day to come together as a community and to focus on the subject.”
“We have been participating and supporting Communities of Light and Womanspace for many years,” she said, adding they are proud of the relationship.
During the winter solstice in December, Communities of Light candles line the streets of central New Jersey – a symbol of hope for women and children impacted by domestic violence and sexual assault in our community. The initiative raises awareness of domestic violence and sexual assault and highlights the services that are available to help victims in Mercer County. The candles come from luminary kits, according to the Womanspace website.
Each year, more than 200 volunteers sell, distribute and display the luminary kits. Volunteers sell the luminary kits to their friends, neighbors and co-workers, according to its website.
At dusk on Dec. 7, hundreds of people, scores of organizations and community groups, and the municipalities within Mercer County lit thousands of their candles. One hundred percent of the proceeds from event, sponsorships, luminary kit sales and donations to Communities of Light benefit Womanspace programs that serve more than 10,000 adults and children each year, who are impacted by domestic violence and sexual assault, according to its website.
Mayor Mironov lit the first luminary candle to kick off the event.
“Lighting candles tends to be something positive historically through all of our traditions and religions,” she said.
The mayor said the lights will circle the entire municipal building perimeter.
Attendees went outside the Municipal Building where they spread out and began lighting the luminary candles, which were placed all around the building lighting them until each one was lit.
Mayor Mironov said that the candles stay lit for about an hour.
“It looks pretty,” said Senator Linda Greenstein, after walking around the building and seeing everything lit up.
Afterwards, everyone was invited back inside the Municipal Building for refreshments.