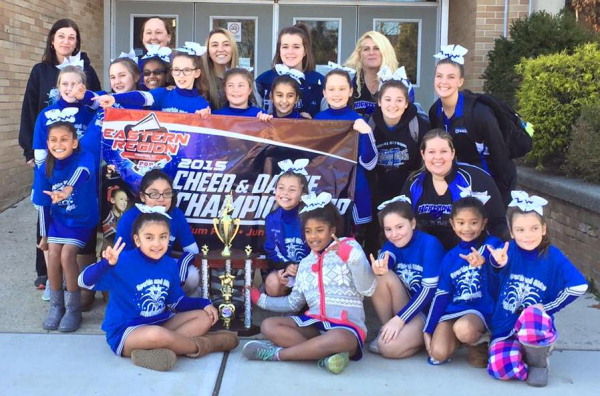 By Amy Batista, Special Writer
ORLANDO – The Hightstown Pop Warner Cheerleaders took to the mats first thing Wednesday morning at the 2015 Pop Warner National Cheer & Dance Championship in Disney World to compete at the national competition.
“Our girls did their best today,” said cheer director Michelina Thornton. “They didn’t place in the Top 5, but we are very proud of all the effort and spirit they’ve shown all season. This is a major accomplishment getting this far.”
Ms. Thornton said she appreciated the support the team got from the community.
“They have really helped financially to make this experience for the girls possible,” she said. “We also have wonderful cheer parents who have been great and supportive all season. We are so very proud of these girls and all they’ve accomplished.”
The nationals are being held at the Disney’s Wide World of Sports Complex Dec. 5-11. The team was representing the Eastern Region of Pop Warner, which consists of New Jersey, New York, Pennsylvania, Delaware, Maryland and Washington, DC.
The team took first place first place recently at the 2015 Pop Warner National Cheer & Dance Championship on Nov. 14 which was held at the Sun Bank Arena in Trenton.
The team is lead by head coach Stephanie Ward, who has been coaching for Pop Warner for 12 years. Assistant coaches are Stacy O’Donnell, Toni Stanley, Kathryn Cunningham, Mackenzie Mauro. Junior coaches are Blake Slattery, Lilian Palmere and Melanie Martin.
“We were first on the mat this morning which was good and bad. The girls were very nervous,” said Ms. Thornton. “The girls started warming up at 7:20 a.m. We had a 60-minute practice yesterday and 20 minutes today.”
Kaylah Thornton, of East Windsor, said the best part of going first on Wednesday was that they got it done and were able to watch all the other teams.
“We got the crowd excited for a great day,“ she said.
The local squad competed against 14 other teams, according to Ms. Thornton.
There are 15 girls on the team. They had to arrive by Monday and many stayed until Thursday. The team is staying at the Disney’s All-Star Music Resort.
Erin Madrilejos, 10, of East Windsor said she loved the competition.
“I was nervous but excited too,” she said.
Morgan O’Donnell, 9, of Roosevelt, said her favorite part of this experience was that the girls were able to meet so many cheerleaders from all over the country.
Amanda LaRosa, 11, of East Windsor, said her favorite part was competing with all of her friends.
“Going first was scary, but good because we got it done and the stress was past us,” she said.
For Anissa Singh, 11, of East Windsor, it was being able to go to the parks with all of her friends.
“Being first on the mat was great,” she said. “We were able to get done and watch the other teams with our nerves past us.”