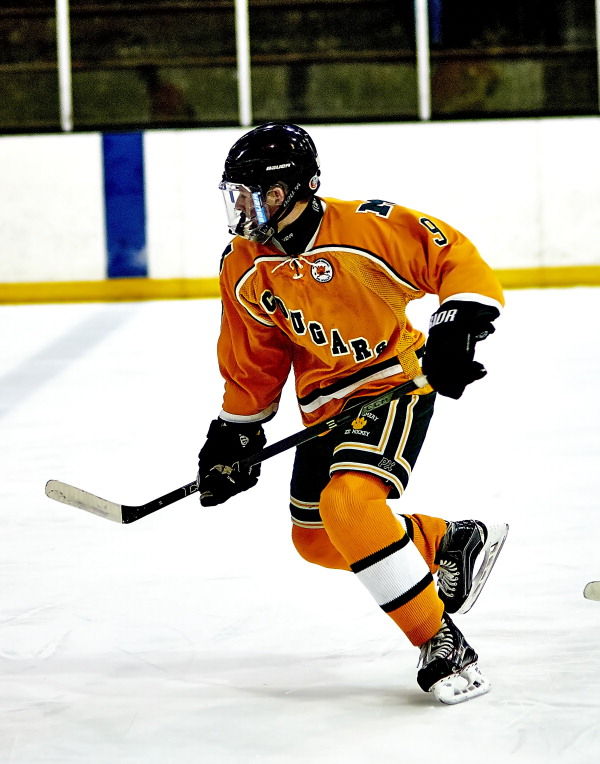 By Bob Nuse, Sports Editor
SOUTH BRUNSWCK — The Montgomery High ice hockey team was able to shake off a disappointing performance and hopefully gets its season pointed in the right direction.
After dropping a 9-1 decision to Ridge last week, the Cougars bounced back with an impressive 6-2 win over Bernards on Wednesday at ProSkate in South Brunswick to even their record at 1-1-1. After a rough effort against Ridge, Montgomery put things together in the win over Bernards.
“It’s the first win so it is a big win for us,” said Montgomery coach Andy Gojdycz, whose team will be back in action on Saturday at 8:30 p.m. against Howell. “It’s something that we needed to get the ball rolling. We were off to a slow start and this helps get the monkey off our back. The first one is always big.”
In their opener, the Cougars rallied from three goals down to tie Pingry, 3-3. The win over Bernards is one that hopefully has their momentum heading in the right direction.
“Over the course of the season we have been picking up our play,” said sophomore Jackson Devine, who scored a pair of goals in the win. “This is a big win for us confidence wise. Hopefully it will carry over. Everyone is trying to figure out their roles and I think once we do that we’ll be a good team.”
Devine is one of the players the Cougars will be looking to step into a bigger role this year. He played as a freshman but comes into his sophomore season as a much more experienced player.
“I’ve been happy,” Devine said. “I put in a lot of work in the off season since the end of last year. I played with the Princeton Tigers U16 AA team and we had a lot of success. That helped me get some experience playing with and against some pretty good players.”
Devine and the Cougars know that each time they take the ice in the Skyland Conference they will be facing good players. The league is consistently one of the best in the state and this year should be no different.
“We play great teams like Ridge and Bridgewater and others,” Devine said. “It keeps us on our toes and sharp every game. This was a good win and now we need to build off it and get a good streak going.”
In addition to the two goals from Devine, Matt Farley had a pair of goals, while Paul Tedeschi and Griffin Connolly also scored. Chris Quesnelle made 18 saves to pick up the win in goal.
“I’m happy with the team we have,” Gojdycz said. “They’re all young which is great. We still need to get the little things down to get things moving. Right now we’re getting all of our combos and lines down to see what works and doesn’t work. It takes time, especially with younger players.”
As part of a talented sophomore class, Devine is one of those younger players who has stepped in and made an impact.
“Jackson is on the rise as a player,” Gojdycz said. “He was in the right place at the right time and was able to put the puck in the net which is what we need right now.” 