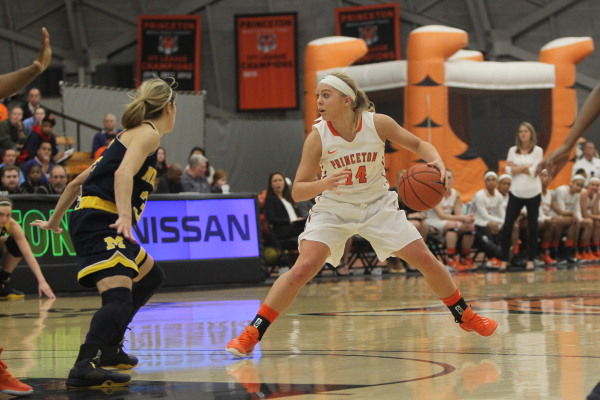 By Bob Nuse, Sports Editor
Amanda Berntsen waited patiently for her role to increase with the Princeton University women’s basketball team. And now that it has, the senior point guard is making the most of the opportunity.
Berntsen started all 32 games for the Tigers last year. But with Ivy League Player of the Year Blake Dietrick running the offense, Berntsen never fully had the chance to show what she could do in a lead role.
She averaged 6.9 points a game and had 55 assists as a junior. But this year with the offense in her hands she is making more of an impact for herself and her teammates.
“With the graduation of Blake last year, coming into this year I knew my role would be a lot different and the ball would be in my hands a lot more,” said Berntsen, whose scoring average is up to 9.4 points a game and already has 30 assists in just eight games.
“It just came down to every day in practice just working as hard as I could and talking with Coach (Courtney Banghart) going over the offense and what I am looking for and understanding what my role is on the team. This year more than the last couple years I have just fit into my role. I am surrounded by great players as well.”
Berntsen’s play has helped the Tigers to a 7-1 start, including wins over Monmouth (81-70 on Tuesday) and Michigan (74-57 on Sunday) at home earlier this week.
“Amanda is as competitive and as fearless as they come,” said Banghart, whose team will host Pittsburgh on Saturday at 3 p.m. at Jadwin Gym. “She is a kid that you just can’t play without. When your lead guard is just that tough it is a good thing to have on your team.”
Berntsen has just two points but chipped in with five assists in the win over Monmouth. In the earlier win over Michigan she had 13 points and four assists. Her play has helped the Tigers adjust to life without Dietrick.
“We have played together a lot, our whole class has, so we know what Amanda can do,” said senior Michelle Miller, the Tigers’ leading scorer. “There are times you miss certain things Blake brought last year. But Amanda steps up in her own way and brings certain things that can make us just as good.”
The Tigers will host Fordham on Monday before closing out December with road games at Ohio State, Dayton and Marist. They have bounced back well since falling to Seton Hall in the third game of the season and have now won five straight games.
“It shifted our mentality,” Berntsen said of the loss to Seton Hall. “I think going into the Seton Hall game we went in hoping we were going to win and not having the confidence that we are a better team and we can win. All of us together did a good job of focusing in our heads that Michigan is a good team but we’re a better team.”
Added Miller: “I think it really showed us we need to be confident in what we do and play the way we know we can play and not let other teams take us out of that. We focused a lot in practice on looking for our looks that would be advantageous for us and coming in with the right mentality.”
The Michigan game was played before a season-high crowd of 1,851 and was also shown nationally on ESPN2. The Tigers know past performance had a lot to do with building a following that not only attracted nearly 2,000 fans, but a national television audience as well.
“I told them before the game and I told them again after the game that these seniors, in particular, have really accomplished something,” Banghart said. “To have a home game on ESPN2 and in the national spotlight is because of what they have done. We had an opportunity to make it count this year.
“It was a huge crowd and to have ESPN2 here for the first time in a long time was amazing, especially for the women. So a lot was riding on it and these guys have put a lot of time in to make it happen. I appreciate how much they honored the opportunity.”
The Tigers will be looking to continue to build on their success. Over the previous six years the team has won five Ivy League titles and 148 games. It’s a successful program that carries on as the roster turns over.
“Credit to the classes before us for just kind of getting a fan base for us and these past four years as well,” Berntsen said. “It was amazing to have this kind of environment. They brought energy and excitement and it helped carry and pick us up.” 