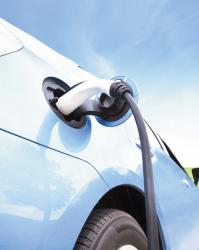 Those who still think gas prices are too high can find great deals on the most fuel-frugal used cars Used vehicle sales are soaring these days, and so are their prices. Edmunds.com in Santa Monica, Calif., reports that average used car prices have soared to a record high rate of around $19,000.

But there’s one segment of the used car business that’s actually headed in the opposite direction as far as pricing is concerned.

Electric vehicles and gas/electricpowered hybrids are being battered in the pre-owned market by an unfortunate combination of market forces. According to the recent Electric Vehicle Retention Report Card compiled by NADAguides in Costa Mesa, Calif., trade-in values of some two-year-old electric and plug-in hybrid vehicles are dropping like rocks, with some returning just around 20 percent of their original retail prices after three years.

The best deals are among full electric cars, including the Nissan Leaf, Ford Focus Electric and the tiny smart fortwo electric drive, which are selling for as little as $10,000 for a 2013 version with around 22,000 miles on the odometer. When they were new, most of these cars carried sticker prices as high as $40,000. According to Kelley Blue Book, a used 2012 Mitsubishi i-MiEV electric car that gets the equivalent of 112 mpg sells for around $8,000 in the Chicago area. Motorists having modest daily commutes and/or using them for around-town use could find any of these pre-owned electric cars to be real money savers.

As is typically the case, the law of supply and demand largely determines values in the used-car market. With gasoline prices still at least a buck a gallon less than they were a year ago, consumer demand for the most fuel-frugal rides on the road has softened considerably. As it is, electric and plug-in hybrid vehicle values tend to plummet more quickly than normal due to a federal tax credit granted to new-model buyers that runs from $2,500 to $7,500, depending on the model.

And then there’s consumers’ ongoing hesitation toward electrified vehicles in general. “Used EV demand continues to be hampered by range and technology concerns,” according to NADAguide’s report. “Many three-year-old EVs are now nearing or already to the point where they are no longer covered by their respective manufacturer’s basic warranty due to age or mileage accrual, [which is] a potential concern since an extra layer of risk is being added into the mix when used EV buyers are shopping for vehicles.”

Still, hybrid and EV batteries are usually guaranteed for eight years/100,000 miles, which means a three-year-old used model will still have five years of coverage remaining for this key component. Replacement costs for such power cells can run anywhere from $2,500 to $3,000 or more, though prices are expected to drop in the future.

What’s more, with automakers having pushed leasing aggressively in recent years with big discounts and incentives, there’s a slew of two-and three-year old low-mileage models returning to the market. According to the Wall Street Journal, 85 percent of Nissan Leafs were leased last year and the vehicle’s residual values are winding up being thousands of dollars less than originally estimated.

“The Model S (is) purchased by affluent consumers [and] demand has been predicated on owning a vehicle with cachet and exclusivity,” says NADA’s report. “By comparison, demand for more inexpensive models — such as the Chevrolet Volt and Nissan Leaf — is driven by more pragmatic factors.”