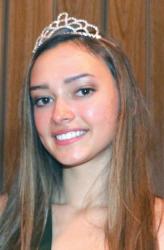 Rebecca, 16, who is an 11th-grader at the Hun School of Princeton, was selected from among 10 contestants by the Agricultural Fair Association of New Jersey during the group’s fall dinner, according to a press release.

As ambassador, Rebecca is charged with visiting New Jersey’s agricultural fairs in 2016, discussing the fairs, promoting agritourism to the public and bringing people together to support the state’s agriculture industry.

“Based on Rebecca’s enthusiasm and passion for agriculture, we know that she will be a wonderful spokesperson as she attends our state’s agricultural fairs next summer,” New Jersey Secretary of Agriculture Douglas H. Fisher said. “Rebecca’s dedication is sure to inspire other young people to get involved in agricultural youth organizations and perhaps move into agriculture careers in the future.”

Rebecca is currently treasurer of the Allentown FFA Chapter, a student member of New Jersey Farm Bureau and has been involved in 4-H since she was in first grade.

She raises sheep, goats, chickens and rabbits on her family’s farm and spent time when she was younger visiting her greatuncle’s dairy farm, according to the press release.

“As agricultural fair ambassador, I plan to increase awareness of the importance of New Jersey agriculture in our daily lives and encourage people to become involved and participate,” she said. “Agriculture has connected me with people who have a similar interest, but who are also extremely diverse because agriculture includes such a wide spectrum of topics. I have learned a great deal from my friends and their knowledge in their areas of agriculture.”

Rebecca hopes to attend Rutgers School of Environmental and Biological Sciences to pursue a career in veterinary medicine. Her goal is to become a large animal veterinarian, treating farm animals, according to the press release.

This is the 13th year the Agricultural Fair Association of New Jersey has named an ambassador. In choosing an ambassador, the association seeks a good representative of young people active in agriculture in the Garden State and their county fair.