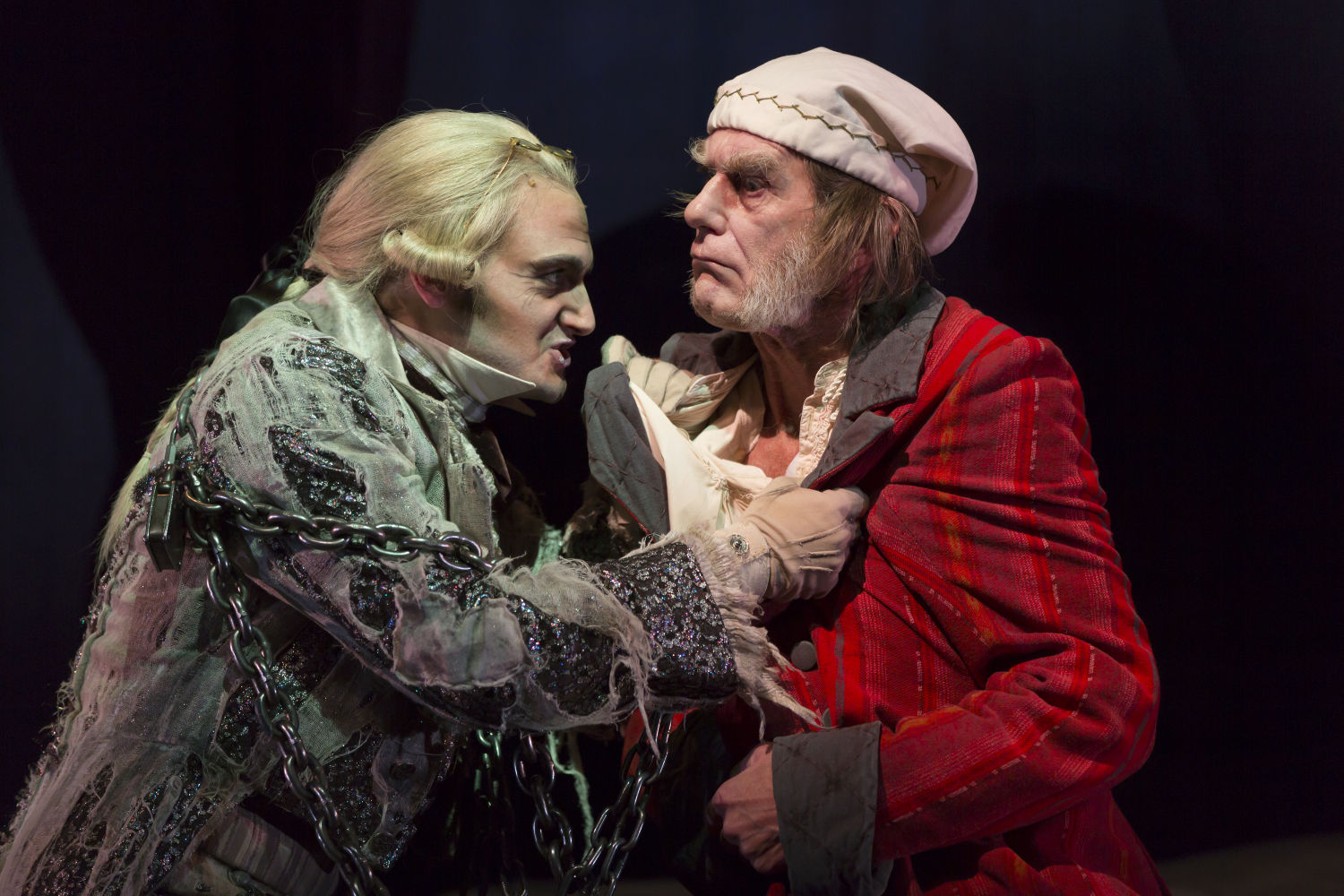 By Bob Brown
This is it. The last call for McCarter Theatre’s annual staging of Dickens A Christmas Carol in its present production, now playing through Dec. 27. David Thompson’s adaptation of this Christmas tale has been delighting Princeton audiences for each of the last 16 years. Returning as director is Michael Unger. As you’ve come to expect, it’s hugely entertaining, with rousing music by Michael Starobin and, as usual, dazzling choreography by Rob Ashford. And those jaw-dropping aerial effects? Yeah, they’re back too — as well as a looming, scarifying puppet.
Ming Cho Lee’s set design is as impressive as ever: Fezziwig’s two-story office, Ebeneezer’s front door and its doorknocker with an attitude, his bedchamber and its flying books and disobedient candles, the Cratchits’ humble dining room. Jess Goldstein’s brilliant costumes brighten up the otherwise gloomy London backdrops — this is, after all, a ghost story.
And that age-old story hasn’t changed. It’s all held together by the central figure — Mr. Scrooge. For the past five years Scrooge has been played most effectively by Graeme Malcolm. How many different ways can you say, “Bah, Humbug”? If there are 1,000, I think Mr. Malcolm has found 1,001. I’ve seen him in this role for the past few years now, and he has new angles, new depths each time. He puts genuine emotion into the character. He even makes the guy funny, to the extent that’s possible. He’s a pleasure to watch.
Also returning to the stage are James Ludwig in several roles — as Scrooge’s nephew, Fred, the Schoolmaster, the lugubrious undertaker, and dance captain — January LaVoy as Mrs. Cratchit; and Brad Mott as the ebullient Mr. Fezziwig and the graveyard entrepreneur Old Joe.
New to the ensemble are Leah Anderson as the young Ebeneezer’s fiancée, and as Scrooge’s long-ago love, Belle; Billy Finn as the ghoulish Jacob Marley; Allison Buck as the sprightly Fan and Mrs. Bonds; and Kathy Fitzgerald in the roles of Mrs. Fezziwig, Mrs. Stocks, and the graveside Laundress.
Also new this year are David Kenner as young Ebeneezer; Anne O’Sullivan as Mrs. Dilber; Allen E. Read as Bob Cratchit, along with the Cratchit children Peter (Liam Angello), Belinda (Ivy Cordle-returning from last year), Martha (Quinn Thierfelder), and of course Tiny Tim (Jonas Hinsdale). Christmas Past is a trio of sprites: Madeline Fox, Caroline Bednar, and Neha Kalra. Nike Kadri is the bespangled, joyful Ghost of Christmas Present.
The story is a sharp indictment of England’s horrendous child-labor practices, which the 12-year-old Dickens experienced firsthand in a blacking factory (the boy Scrooge, played by Andrew Davis, is a near-autobiographical portrait). In 1843, Dickens had felt this sentimental tale would be much more effective than the political pamphlet he first intended to write. But it’s also a portrait of how Christmas was beginning to take shape as the Yuletide holiday we know today, with Christmas trees and carolers. Scrooge bridges the two well-defined worlds of Victorian England, between nephew Fred’s high-style party with dancing and games, and that of his poor clerk Bob Cratchit, with a more modest and humble celebration.
Because Dickens’ tale is a ghost story, there are dark and haunting moments that may be intense for very small children, who will otherwise be delighted by the show. There are many children in this production, singing and dancing.
On the flip side of its ghostliness, this is a very colorful, tuneful, boisterously joyful show. If you somehow haven’t seen this brilliant production over the years, this is your last chance. Don’t miss it before the final curtain on Dec. 27. McCarter promises “a tradition renewed” for December 2016. What that may be we don’t yet know. But for now we have this, one of the best Christmas Carols of all.
A Christmas Carol continues at McCarter Theatre, 91 University Place, Princeton, through Dec. 27. Performance is 2 hours with one intermission. Tickets range from $25 to $88.50. For tickets and information: 609-258-2787 or www.mccarter.org.