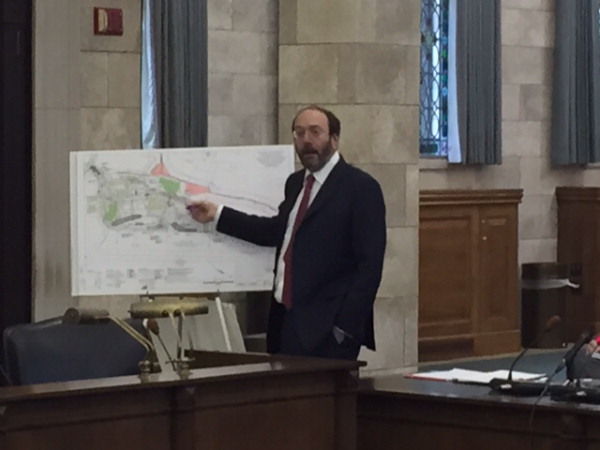 By Philip Sean Curran, Staff Writer
The fight to preserve part of the Princeton Battlefield from being turned into a housing development by the Institute for Advanced Study made its way to the halls of the state Legislature on Monday, as sympathetic lawmakers stepped in to try and halt the project.
Members of a Senate committee said they want to get to the bottom of whether wetlands are on a site where the IAS is preparing to build 15 units of faculty housing on about six acres of its land adjacent to Battlefield State Park.
Sens. Bob Smith (D-17), Linda R. Greenstein (D-14) and Kip Bateman (R-16), all members of the senate Environment and Energy committee, sent a letter to DEP commissioner Bob Martin asking him to put a hold on the project until the committee hears from the DEP on the wetlands issue. For its part, the DEP said it does not issue stays, something that was up to a judge to do.
The letter went out the same day that Bruce I. Afran, the lawyer for the Princeton Battlefield Society, and other advocates went before the committee arguing that there are wetlands on the development site, an area they say is of historic value given that fighting took place during the battle of Princeton in January 1777.
In his remarks before the committee, Mr. Afran said that Amy S. Greene, a hydrologist, was retained by the IAS to do a wetlands survey in 1990, a report that found wetlands in the middle of where the IAS is planning to build. A subsequent survey in 1999, by another firm for the IAS, found no wetlands in the same area.
Mr. Afran contended that the IAS did not disclose to the DEP the original 1990 survey indicating the presence of those wetlands when it sought clearance from the agency for its housing project.
To him, that represented “a pattern of deception” to conceal the information from the DEP, which, in 2000, granted the IAS a “letter of interpretation” saying there are no wetlands in the construction area.
Mr. Afran said that in 2011, the Battlefield Society had hired Ms. Greene to contest the IAS application before the then-regional Princeton Planning Board. Her survey found the same wetlands that she originally had identified in 1990. Ms. Greene also testified at Monday’s hearing to support her findings.
He also said that a 2012 soil report by the IAS engineer also found wetlands but that the IAS did not turn over the information to DEP.
For his part, Sen. Bateman said the DEP revisited the site a few weeks ago and claim it sticks to its original interpretation.
“This issue, I would think, would be either black or white,” he said. “Either the wetlands are there or they’re not.”
Representatives for the DEP and IAS were not present at the hearing. The IAS directed a reporter to a statement issued this month saying the IAS was moving ahead with the project.
The IAS has begun doing some site work, but the Battlefield Society plans to go to federal court this week, perhaps as soon as Tuesday, seeking a restraining order to block that from continuing.
Defenders of the land point to its historic value, where George Washington staged a winning counter-attack during the battle of Princeton — seen as a turning point of the war. They also point to the potential trove of artifacts buried under the “hallowed” ground.
The IAS has turned down two offers from the Civil War Trust, a Washington D.C.-based nonprofit that saves battlefields, that is interested in buying the land and turning it over the state to be preserved. The latest offer was for $4.5 million.
“So I’m heart-attack serious when I say that this is extremely important land, in our opinion,” said James Lighthizer, president of the Trust, told the committee. “We believe this is part of our American heritage. It just doesn’t belong to the Institute. It belongs to the American people.”
But he said his side cannot even get a meeting with the IAS.
The Battlefield Society came close to defeating the project when it went before the Delaware and Raritan Canal Commission in January. A commissioner, Mark Texel, director of the state Park Service who is Mr. Martin’s representative on the board, initially abstained from the vote, which led to the development failing.
He changed his mind a month later, moved to have the DRCC reopen the matter and then voted for it. At Monday’s hearing, Mr. Afran claimed that Mr. Texel did so based on “political pressure.”
Mr. Afran claimed that in September Mr. Texel, in the presence of Mr. Afran and two other people, said he was sorry for the revote that he had asked for but explained that he had gotten a call from Mr. Martin’s office.
“He made it clear to us that he was pressured into that revote decision by the commissioner’s office,” Mr. Afran told reporters after the hearing.
“We’re disputing that characterization of the conversation, and it’s just hearsay,” said DEP spokesman Larry Hanja.