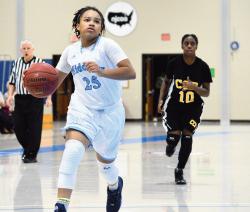 Middlesex Community College’s Ziykara Hicks, driving for two in a recent game at the Community College of Philadelphia, was named the Garden State Athletic Conference (GSAC) Player of the Week when she averaged 25 points, three steals and 3.5 assists a in leading Middlesex to a pair of victories. The Middlesex women’s basketball team is 11-1 overall, first in the GSAC with a 7-0 mark and tops in Regional 19 with a 10-0 record. MATT DENTON METUCHEN

If the first game is any indication, the

Metuchen High School girls’ basketball team will lean on a core of underclassmen for success this season.

In a season-opening game against Mother Seton Regional High School Dec. 18, the Bulldogs romped to a 55-19 victory, led by junior Brooke Bandola and sophomore Rory Josell, who scored 12 points each, along with sophomore Kerri Ferrell, who had 17 rebounds. In addition, senior Kelly Burke was a major force on defense with six steals. 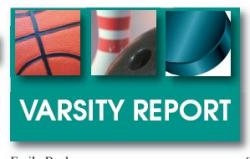 The other members of the starting rotation include seniors Alexa Craft-Zaletel and Emily Buchanan.

First-year coach Max Wexler said the roster features a number of non-seniors, but much of the core group has been together for multiple seasons and the chemistry that’s developed will serve them well.

“The young players are capable of putting up big numbers in any game,” he said.

“They read each other very well, which is so important when it comes to generating an effective attack.”

Still, Wexler understands consistency only develops over time, so he’s anticipating some growing pains before his team fully matures.

“When we do put it all together, we can become a very good, well-rounded team,”

Wexler said. “Our goal is to win the

Blue Division and be competitive in the [NJSIAA] Central Jersey Group II bracket.”

According to head coach Charlie Mohr, who enters his 13th season at the helm, the Eagles’ lack size, which makes rebounding a challenge. To make up for that, Edison (6- 16 last year) hopes to rely on an up-tempo offense that capitalizes on the team’s overall speed.

Outside of competition in the GMC White Division, the Eagles’ boys are joined by the girls basketball team and cheerleaders performing drills at a pep rally held in

Piscataway for children with special needs.

The J.P. Stevens High School boys’ basketball team got off to a positive start by defeating Monroe Township High School, 56-23, in another GMC White Division contest Dec. 18. Based on the scoring in that victory, the Hawks will benefit from a balanced lineup that returns intact except for one starter.

Alex Corrigan led the scoring with 15 points, followed by Mike Lionikis and Rishav Ghosh, who contributed 11 and 10 points, respectively.

“We possess good experience in the front and backcourt,” said seventh-year head coach Bobby Jones, whose team finished 10-15 last year. “We fully expect to compete for the division title. We’re also looking to win a few rounds in the GMC Tournament, qualify for the states and get at least past the first round.”

Among the community projects sponsored by the Hawks is a fundraiser that provides proceeds to an area homeless shelter.