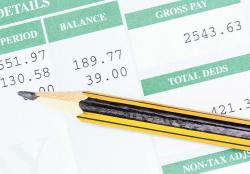 No matter how adept they are converting ratios into percentages, however, many mortgage seekers will find this equation difficult because they can’t pin down a monthly income number. A recent study by J.P. Morgan Chase Institute, a nonprofit arm of the banking firm, found that 41 percent of individuals experience monthly income fluctuations of more than 30 percent.

Irregular work schedules and other changes in employment patterns cause pay variability, posing a budget problem.

Indeed, the JPMCI report reads: “Individuals need to appreciate the degree to which income and consumption are volatile, and to prepare for the possibility that they might — unexpectedly or outside of their control — experience a negative swing in income.”

But “fluctuating income is not usually a problem as long as we can document why it is fluctuating and establish a history that makes sense,” notes Neil Caron, vice president at Freedom Mortgage Corp. in South Windsor, Conn.

An income history helps put monthly fluctuations in context. For instance, a server at a high-end restaurant who’s been on the job five years but whose annual income dropped 10 percent last year may be required to submit a letter of explanation, says Caron. And, if income has declined for two years, the lender will use the lower figure.