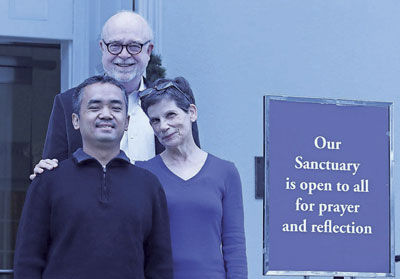 By Philip Sean Curran, Staff Writer
Nassau Presbyterian Church is looking to bring in a Syrian refugee family to live in the area, potentially as soon as the first part of 2016, said leaders at a church that has been helping refugees for decades.
Seeing the flood of refugees entering Europe earlier this year, pastor the Rev. David Davis said his church had contacted Church World Service, an international relief organization that has State Department approval to refer refugees for resettlement.
“We have no reason to not think that we’re still looking at early in the year, but they’ve made no guarantees nor have they indicated the family or family type,” he said in an interview from his office. “They’ve made no commitments to us, but we have every expectation that we’re moving ahead.”
The church has partnered with the Princeton Theological Seminary to temporarily put up the refugee family in non-student housing. For privacy reasons, the location of where the Syrian family will stay will not be disclosed, said Anne W. Stewart, director of external relations at the Seminary.
Once they arrive, the church and others will help them with food and other basic needs as well English-language training.
“This is what people of faith are called to do. You don’t get any more basic in the Gospel message than caring for the poor, serving the orphans and the widows and welcoming the stranger,” the Rev. Davis said.
Through a program it has been running for more than 50 years, the church has helped nine other refugee families resettle in the United States. Families have come from all corners of the world, like Iraq and Burma.
“Early on, members of the church were led to reach out, in various situations over the years, to receive a refugee family in need and then to surround them with the services and the support the church could provide,” the Rev. Davis said. “It is a matter of how we’ve discerned to live out God’s call. And there’s a refugee crisis in the world right now and why would we not live into it as we have for 50 years.”
One Princeton family might be the poster-child for the program.
Za Bik Thang, his wife, Par Tha Hniang, and their three children were helped by the church eight years ago. The couple agreed to be interviewed earlier this month from their home in Princeton. Sitting at their dining room table, they recalled the journey they took, the separation from one another and the eventual journey to America.
Mr. Thang had to flee his native Burma due to political persecution. Arrested and tortured, he escaped to Malaysia even as family remained behind until they joined him nearly two years later. Ms. Hniang and her then-small children risked arrest by being smuggled out of the country so they could be reunited with Mr. Thang.
Eventually, with the aid of the United Nations, they made their way to the United States, with members of the church meeting them at JFK Airport in New York in July 2007.
“It’s amazing,” said Ms. Hniang, who was able to get a job as a tailor at Nick Hilton’s clothing store on Witherspoon Street. “We can’t say thank you enough.”
Church members helped the family with English lessons, including their oldest daughter, now a student at Lafayette College.
“That’s how God is good for us,” Mr. Thang said.
Tom Charles, a church member who helps the coordinate the refugee resettlement program, said that about 20 years ago, he and his wife, Lynn, took in a family of four from Bosnia for a couple of weeks. During that time, his family helped them with their English, to look for work and get settled in Princeton.
“It was one of those experiences you get a lot out of,” said Mr. Charles, who today counts the family as among his closest friends. “From my perspective, this is as intensive a sort of mission activity in terms of the numbers of people at Nassau. This is something that a lot of people get involved in.”
Through the years, the church has worked with refugee referral agencies — all approved by the U.S. State Department — to serve as the middle man between the congregation and a family in need. The Rev. Davis said his church program is a grassroots effort that is a model that other houses of worship have looked to for refugee resettlement.
Yet the Syrian refugee question is divisive. A Rutgers-Eagleton poll released in early December found New Jersey residents evenly split on whether the state should accept refugees from that country. Gov. Chris Christie wrote in a letter to President Barack Obama saying that New Jersey would not take them in amid concerns that the federal government would not adequately vet them.
But to Pastor Davis, the issue has been “politicized.”
“We’re not interested in picking a fight as it were,” he said. “We’re just living out what we believe God has called us to do as a community and to continue what we’ve been called to do.”
He said that based on experience, the church has seen how refugees get vetted — both for security and medical clearances — and trusts the processes that are in place.
He recalled that after some states’ governors voiced their opposition to taking in Syrian refugees, he wanted to make clear where his church stood.
“I said to the congregation, Nassau Church has been in the refugee resettlement business for 50 years. And we don’t plan to stop now.”