Above: Eagle Scout Atreya Verma proudly stands in the three-bin compost unit he installed at Rutgers Gardens with the help of fellow scouts. Right: The work area prior to construction. A local Boy Scout turned trash into treasure for his Eagle Scout project. Atreya Verma of North Brunswick built a three-bin compost unit at the children’s park in Rutgers Gardens to make more compost available in order to increase productivity.

“The garden relies on compost to increase its soil fertility. It generates a lot of leafy waste, which can be composted and used further in the gardening process,” he said.

“Composting provides a way to reduce disposable waste and also converts it into something useful for the garden.”

The 17-year-old said the idea for the project began in his mother’s kitchen.

“She makes crepes out of banana skin and pickles the mango pits. We eat fruit preserves at home versus the jelly. She makes savories out of pumpkin seeds and can sometimes surprise you with her ways of using plantain leaf and coconut husk,” he said. “She reuses the kitchen sink water to water the flower pots in the backyard.” 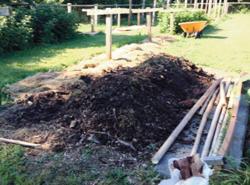 PHOTOS COURTESY OF ATREYA VERMA The member of Boy Scout Troop 109 out of East Brunswick said his project represents the spirit of scouting: being thrifty by making the best out of waste.

“To me, being an Eagle means being prepared for life and developing hobbies that will last through my adult life.”

Atreya has been leading the Conservation of Energy Resources department at the dorm of The Lawrenceville School. His “humble attempt” at saving energy there was to decide on days when everyone is mandated to study in the library and not their rooms.

“In my experience, it can encourage even the most stubborn anti-“green” individual to take part in making a difference,” he said.

Atreya seems to live an adventurous and productive life.

One of his passions is to climb mountains — he has conquered Mount Kilimanjaro in Tanzania and Mount Fuji in Japan.

“It makes me feel like I have found another piece of myself,” he said.

He also started his own nonprofit organization, www.shareyourbook.org, which collects donations of books and ships them to India where children are not able to attend library facilities.

“This also encompasses the idea of going ‘green’ by reusing books,” he said. “I understand that books can be used for recycling by not just reusing pages but also reusing the content by giving it to somebody else that wants to read it.”

Atreya plans to attend to college after graduating from The Lawrenceville Prep School.

He will be the subject of an Eagle Court of Honor on Aug. 15 at St. Bartholomew’s in East Brunswick.