Gary Poedubicky, the N.J. Division of Highway Traffic Safety Director, said the increased concern of distracted driving is “right on par” with that of driving while intoxicated.

“Unfortunately, many people have a very casual attitude toward using their phone while operating a motor vehicle,” he said. “There are a number of distractions that impact driver safety and everyone else on the road.” According to the New Jersey State Police 2013 Fatal Crash Report, there were 508 fatal motor vehicle crashes in which 542 people were killed in 2013. 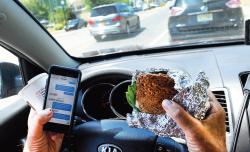 PHOTO ILLUSTRATION BY STAFF PHOTOGRAPHER ERIC SUCAR In 121 of the 508 fatal crashes, driving while under the influence of alcohol and/or drugs was listed as the major contributing factor.

According to the same report, driver inattention was listed as a contributing circumstance in 164 cases of the 508 fatal crashes, but not the major contributor. Violet Marrero, the manager of special projects for the N.J. Division of Highway Traffic Safety, said driving while intoxicated and driver inattention are very different situations but relate in terms of a driver’s reaction to the road.

“When a driver is under the influence of alcohol or drugs, their reaction time is distorted largely because of their intoxication levels,” she said. “That is similar to distracted driving because the driver is focused on something other than the road, which also distorts their reaction time to circumstances on the road.”

The state Attorney General’s office defines driver inattention as any activity that could divert a person’s attention away from driving, such as using electronic devices, applying makeup, changing the radio, speaking to a passenger, eating or drinking.

From 2003 to 2012, more than 1,600 people were killed in crashes caused by distracted driving in New Jersey, according to the N.J. Department of Law and Public safety, Office of the Attorney General.

Capt. Stephen Jones, director of communications for the New Jersey State Police, said distracted driving is the largest cause of traffic crashes in the state.

He said the deadliest distraction comes from people text messaging while driving because their concentration, hands and eyes are all disengaged from the road and from the job of driving.

“Today’s electronics have exposed some communications addicts who can not seem to ignore that text, phone call or social media post until they are done driving,” Jones said. “By degrees, the problem seems to get a little worse each year.”

Jim Lardear, director of public and government affairs for AAA Mid-Atlantic, said it is hard to tell what causes a crash because some drivers are hesitant to admit their wrongdoings.

Poedubicky said even though there are laws in place prohibiting the use of a handheld device while operating a motor vehicle, people still decide to do it anyway.

“Today the number one concern, of course, is talking on the phone and texting while driving,” he said. “Our advice is always to just hang up and drive to avoid the consequences of driving while distracted.”

Penalties resulting from using a handheld electronic device while driving can range from a $200 fine for a first offense to an $800 fine and three insurance points against a driver’s license for a third offense, Poedubicky said.

The National Highway Traffic Safety Administration lists three types of distractions: visual, manual and cognitive. Text messaging requires all three, as one needs to use their eyes to read, fingers to type and mind to process it all.

Jones said law enforcement is only able to stop so much of these illegal behaviors. It comes down to people realizing that driving is priority number one while operating a motor vehicle, he said.

“All law enforcement joins together to share these messages,” Jones said. “But drivers, and especially parents of young drivers, need to lead by example and refuse to use electronics when in the driver’s seat.”

Lardear said electronic device use while driving is distracting teenagers more than anyone else. Their willingness to use handheld technology on the road leads to injuries and deaths too frequently, he said.

“They [teens] are more susceptible to use technology and become distracted on the road easier and more often,” Lardear said. “They are typically over-confident in their ability as a driver.”

Poedubicky said the Division of Highway and Traffic Safety runs a campaign in the month of April called “U Drive, U Text, U Pay.” The purpose is to encourage drivers to stay focused on driving and paying attention to the roadways, he said.

While New Jersey law prohibits the use of a hand-held device while operating a motor vehicle, people still find ways to speak on the phone legally.

Jones said these legal hand-free devices only reduce the need for driver’s fingers on the screen, but they do not eliminate the diversion of attention away from the job of driving.

“We have all seen someone using a hands-free phone with the only advantage being that they now have both hands free to punctuate their conversation with wild hand gestures,” he said.

Lardear said one of the most important things for a parent to do is model good behavior behind the wheel. If a teenage sees his or her parent text messaging while driving, it is not a very good example for someone who is going to start driving on his or her own, he said.

“Teens are very inexperienced on the road,” he said. “You have to have good education and enforcement to make people more aware.”