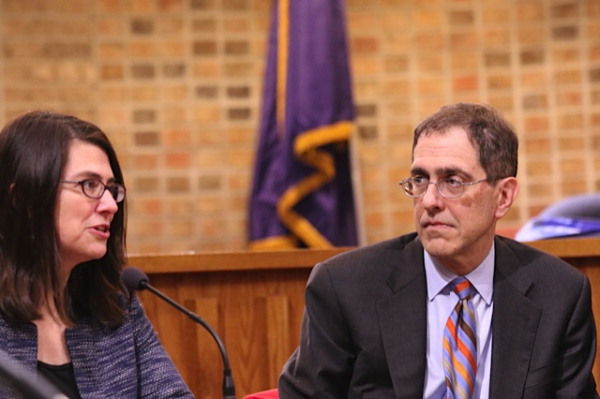 By Philip Sean Curran, Staff Writer
Princeton University President Christopher L. Eisgruber on Monday reiterated his belief that his school should admit more students and assured the public and municipal officials that the university’s growth would not come at the expense of the community.
For the third time in his presidency, Mr. Eisgruber sat down with Mayor Liz Lempert and council members for roughly 90 minutes to answer their questions, offer insights into the direction of the school and weigh in on some of the challenges facing the Ivy League university and the rest of higher education.
He expressed his “hope” that Princeton would be able to expand the undergraduate student body, today made up of around 5,200 students, at one of the nation’s most selective schools that admitted 6.99 percent of applicants to the current freshman class. The last time the university let in more undergraduates was around a decade ago.
“Right now, Princeton University turns down a higher percentage and a higher number of qualified students than we have ever done at any time in our history,” he said. “We take great students. I love having them on the campus. They are wonderful people, but I wish I could take some of the ones whom we are now turning down.”
His comments led Council President Bernard P. Miller to ask him about the “cascading effect” that would have with the need for more faculty, presumably wanting to live in town, more staff commuting into Princeton and more grad students needing housing.
“I think we have the teaching capacity in most of our departments to meet added student demand,” Mr. Eisgruber said.
The university is at the early stages of campus planning, a process that will be guided by the school’s strategic plan for how Princeton moves forward. He said the university’s board of trustees is expected, in the early part of next year, to issue a “strategic framework document” that will have priorities for the school.
“There will continue to be growth on the part of the university. I think that it is possible for us to have that kind of growth in ways that are consistent with the aspirations of the town,” he said.
On the future of the Butler Tract, the former graduate student-housing complex being demolished, Mr. Eisgruber said he expected it would be redeveloped for “residential” use.
Mr. Eisgruber touted how he rides his bike to work, in a town trying to be more bike-friendly. He spoke favorably of making it more attractive for people to come to campus without using a car; along those lines, the town and the school are working to have a bike share program starting next year.
“Parking people on our campus constrains our aspirations as a university. It’s expensive to park people on the campus. It uses land and sites that would be better used for other things,” he said.
On other issues, he weighed in on campus safety, his views on reducing the legal drinking age to 18 and the recent campus protest that saw students occupy Nassau Hall. On the drinking age question, he called himself an “agnostic” about it, even though other college presidents favor a reduction.
“I think again here we’re seeing combinations of stresses and other kinds of developments within our society that are producing tendencies toward problematic binge drinking that I don’t think would be solved by a reduction in the drinking age,” he said. “I’m not persuaded that it would either reduce binge drinking or reduce any correlation between alcohol and sexual assault.”
For the first time, the university this year announced it would give its department of public safety access to rifles in cases of an active shooter. Mr. Eisgruber made clear that officers are not armed in “ordinary circumstances.”
“And we continue to think that’s very important to the kind of atmosphere that we have on our campus,” he said.
Yet Mr. Eisgruber also sought to strike a balance between protecting the school and also being respectful of civil liberties, in particular mentioning reports of incidents involving Muslim Americans on college campuses.
“We’re going to have to make sure that we are respectful of their rights at a time when people become, at times, too worried about issues of security,” he said.
Later he touched on the turmoil on college campuses, including what he called the “tense days” on campus when students occupied Nassau Hall last month. “So what we were seeing on college campuses right now, I believe, is a reflection of concerns about entrenched stereotypes and systemic racism in our society,” he said.
Despite he and council covering a wide range of topics, some things went unmentioned.
The subject of the pending legal challenge to the university’s property tax exemption never came up, nor did council members inquire about possible zoning changes the school might seek in the future for its expected redevelopment of Alexander Street.
At one point, Councilwoman Jenny Crumiller pressed him on his views on providing employees with paid sick leave and asked if he would consider the university adopting that policy. He said he could not get into the details of a policy that he had not looked at.
Attendance was light for the meeting, held inside the former Borough Hall, on a rainy night. There were about half a dozen university employees present, including university vice president and secretary Robert K. Durkee, seated at the table with council members, and the school’s chief lawyer, Ramona Romero, in the audience.
In his remarks, Mr. Eisgruber stressed the importance of having open lines of communication between both sides of Nassau Street.
“We know that there are going to be opportunities to collaborate around shared priorities for the town and the university,” he said. “We know that there are going to be moments when our priorities may diverge or require some accommodation between us.”