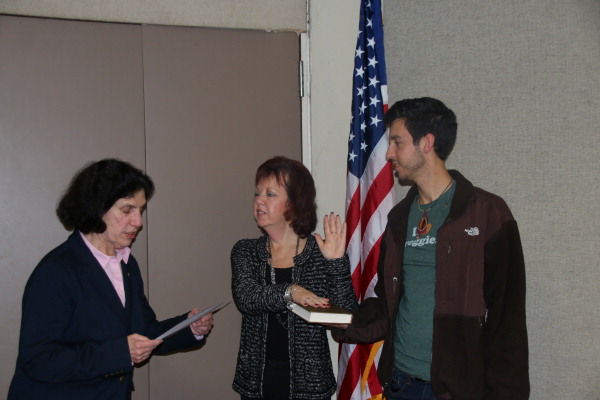 By Amy Batista, Special Writer
EAST WINDSOR – The Township Council unanimously voted to fill a vacant seat by appointing Denise Daniels as the newest council member during its meeting on Dec. 22.
Ms. Daniels is filling the vacancy created by the recent death of council member Hector Duke.
“We sadly had a vacancy occur on the governing body,” said Mayor Janice Mironov. “State law sets out a procedure that is very specific and also a very limited time period to address the vacancy.”
Mayor Mironov administered the oath of office to Ms. Daniels, with her son Adam Daniels at her side, immediately following the vote. Ms. Daniels was invited to then take her seat with council for the remaining few minutes of the meeting.
According to the Brunswick Memorial Home website, Mr. Duke died Dec. 3 at the University of Pennsylvania Hospital in Philadelphia, PA at the age of 81. He was born in Chicago, IL, and resided in Pennsylvania before moving to East Windsor 36 years ago. Prior to his retirement in 1994, he was a manufacturing engineer for IMO Delaval Turbine, Hamilton, where he worked for more than 40 years.
Mayor Mironov said that in accordance with required procedure, the East Windsor Township Democratic Committee met and she had a letter, which was forwarded from the committee with respect to the vacancy.
“I’ve listed on tonight’s agenda for hopeful purpose of filling the vacancy,” she said. “In that respect, I would like to make a recommendation to council and my recommendation would be that Denise Daniels be appointed as a member of the East Windsor Township Council.”
The mayor said that she and the council know Ms. Daniels well.
“She has worked with us both in government and outside of government for many years,” said Mayor Mironov.
Ms. Daniels currently sits as a member of their East Windsor Township Planning Board and has served on that board for several years. Prior to that, she was a member of the Township Economic Development Committee, serving as its one-time chairwoman. And Ms. Daniels is a member of the Board of Trustees of the Better Beginnings Childcare Center for the past last eight years.
“She has also volunteered at many other programs and activities throughout Mercer County and the surrounding counties,” said Mayor Mironov.
Ms. Daniels has raised her children through the public school system (East Windsor Regional School District) and has volunteered as co-chairwoman of the High School After Prom Committee. She currently is the director of community outreach and volunteer operations for the United Way of Greater Mercer County.
Mayor Mironov said she recommended Ms. Daniels she has shown a tremendous commitment to East Windsor.
“She has a great background, has shown a commitment in the past, cares about East Windsor, and is somebody we have worked in partnership with many of our own programs and awards over the last many years,” said the mayor.
Council member Perry Shapiro made the nomination for Ms. Daniels to fill the vacancy.
“We are lucky that we have quality people who can step in in times of need,” said council member Alan Rosenberg.