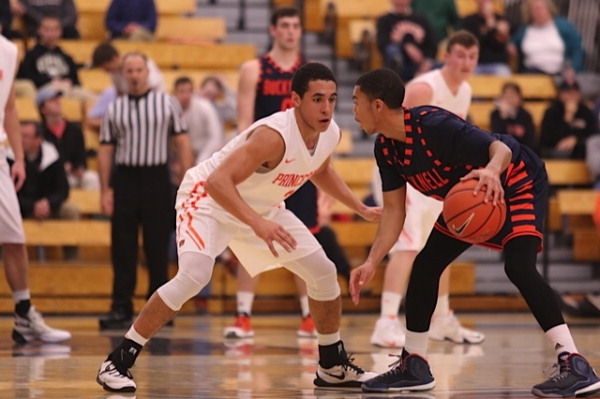 By Bob Nuse, Sports Editor
The Princeton University men’s basketball team went to Miami coming off perhaps their best all-around performance of the season in an 89-77 win over Bucknell.
And while the Tigers were not able to follow up the win over Bucknell with a win at Miami, they did continue their trend of playing well in their 76-64 loss to the 13th-ranked Hurricanes on Tuesday night.
“With Liberty (a 77-72 win) and Bucknell, we see things when we watch video where we know they are good teams,” Princeton coach Mitch Henderson said after the win over the Bison. “I think going into a little break before we head down to Florida we needed it. With Maryland (an 82-61 loss) there is very little margin for error. I think what we’re learning with our group is we need some contribution off the bench and we need everybody to be firing on all cylinders.”
Princeton’s offense was working the way Henderson hopes it will in the win over Bucknell. The Tigers shot 54 percent from the field and had four players score in double-figures, led by freshman Devin Cannady with 17 points. Spencer Weisz had 14 points, while Henry Caruso and Steven Cook added 13 apiece.
“We pride ourselves on being a balanced team,” Weisz said after the win over Bucknell. “I think on any one night someone can have a big game. But we have a lot of weapons offensively, which is beneficial to us. We’ll get the ball to whoever is hot as long as it helps us win.
“I know my shots were not going in early on. But I also know my teammates have a lot of confidence in me so I will continue to shooting and try to be solid everywhere else. I think in order for us to win I need to be solid everywhere, whether it is making shots, rebounding, assisting, whatever it takes I am willing to do to help the team win.”
Cannady is getting more and more comfortable on the offensive end with each game and gives the Tigers yet another offensive weapon.
“I think it has been a process with the offense,” said Cannady, who scored 13 points off the bench in the loss to Miami. “We have a veteran team so if I am doing something wrong they will help me. I feel like I am starting to get my groove as far as knowing what shots to take and things like that.”
The loss to Miami dropped the Tigers to 7-4 on the season. They will play their next three games on the road beginning Sunday at Hampton and continuing Jan. 5 at Norfolk State before opening their Ivy League season at Penn on Jan. 9.
Princeton will host Bryn Athyn on Jan. 24 in their only home game of the month. They’ll miss Jadwin Gym, where they are 4-0 this year (5-0 overall at home with one win at Dillon Gym).
“Jadwin is a special place to play,” Weisz said. “I think when we all decide to commit here and want to play at Princeton you know the history behind it. For so long Jadwin has always been a place where no one is supposed to win and Coach makes a big emphasis on we have to protect home court throughout the year and so far it seems like we have been doing a good job of that.”
Amir Bell led the Tigers with 17 points in the loss to Miami on Tuesday. Caruso had 14 and Weisz 10 in addition to the 13 from Cannady as Princeton once again put four players in double-figures. 